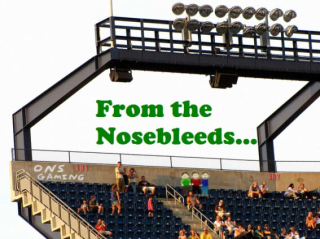 Soccer for the NES is a part of the Black Label Series of carts it also happened to be one of the Launch titles for the NES in America. As the carts name indicates it is a sports game for the NES based on the sport of Soccer/ Football.Originally the game was released in Japan in 1985 followed by the North American launch release later in 1985 and following up to the European release in the beginning of 1987.

The game has the simple goal of putting a single ball through your opponents goal much like the real game as many times as you can within two halves. The game allows you to decided the time of each half: 15 mins, 30 mins or 45 mins which is the actual sports time. The game also has cheerleaders though they are just a minor addition. The game has been criticized for having pretty boring backgrounds within the game. It is understood why the backgrounds are simple fields and walls with nothing much in the way of decor or fans. Of course for its time its still enjoyable thanks to the controls of the game again despite being a little slow.

The controls are simple and slow but do well for the game making matches paced with occasional moments of excitement again similar to the real sport.But due to the controls after playing only one ’30 minute’ match my hand was starting to hurt. The time however is only relative as the time counts down not in real seconds which is annoying. Picking 15 minutes will last a match about 10 mins between the two halves (5 minutes a half) if your playing on skill 1… The skill levels range from 1 to 5 and besides increasing the computer players skill: their movement speed, passing AI and their goalies blocking/catching AI. It also makes the time go faster on level 5 than on level 1.

Now this game actually has teams based on countries of which there are 7 teams total. This was a little surprise to me as most sports games weren’t based on real teams around this time. Of course thinking on it now I know why it was possible… There’s no individual stats or characteristics of the players they are all identical on their respective teams.

The 7 teams that you can play as are as follows:

USA, (USA) in their red shirt and black shorts.

GBR, (Great Britain) in their blue shirt and brown shorts.

FRA, (France) in their orange shirt and brown shorts.

FRG, (West Germany) in their black shirt and brown shorts.

BRA, (Brazil) in their egg cream/white mixed with a touch of yellow shirt and black shorts.

JPN, (Japan) in their pink shirt and black shorts.

And the 7th team ESP, (Spain) and their baby powder teal blue and black shorts. 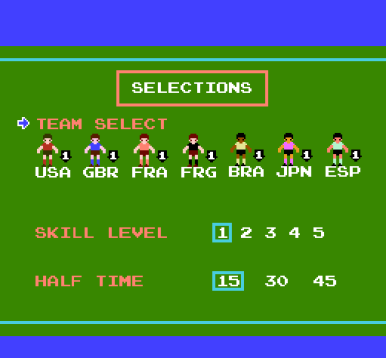 I doubt any of these colors are even referenced to actual kits, though If I’m wrong go ahead and comment below that would be awesome. I tried looking into the USA kit’s to find a reference point but couldn’t honestly find one. I figured it would be easier to do so considering its soccer history is much much shorter. I did however stumble upon an abomination that is uniquely American and without class… (1994 denim kits…) At best USA has worn a mostly Dark red shirt top on a kit but I am unsure if that was a second or third kit.

Back to the game I guess it isn’t such a big deal to me in the end on the team colors considering the limited pallet that the NES had. The players like I said are not unique and have no stat variances so every player is more or less the same the only exception to this are the Goalies to which they actually do wear different clothing than the team so good on this game for that distinction! Granted it is just an inverse of the teams primary and secondary colors but they also wear baseball caps.

When it comes to the Goalies there’s something I need to state because of the slow controls/gameplay actually being a goalie and trying to stop balls is some what easier. The game is played on a level in that there isn’t a difference from a low ground shot to a corner or a high shot to a top corner. Making less tricks shots a goalie has to account for unlike the real sport or soccer/futbol games of today.

There isn’t much else for me to say about this game if your into soccer games this ones one to have for your collection, if your into collecting full series of games then I would pick this up as it’s apart of the Black Label Series of NES games. I will be continuing on talking about that series in further posts. This also happens to be the second of the Black Label Series the first being Excitebike.

The Basic looking field with no adverts even… And here we see the team and the reader celebrating after scoring the end of this post!

Currently there are two tournaments going on: the 2016 Euros and the 2016 Copa America’s and just like mine and Jon’s predictions for the 2014 World Cup we’re going to give them for these two soccer tournaments! 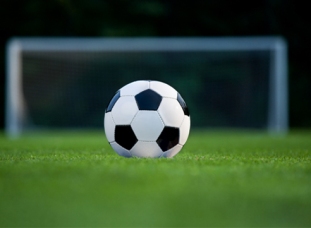 Now for the Predictions!

Want to win: USA, Columbia, and

Want to win: USA, , and Columbia

Categories: Archive, From the Nosebleeds