It is I; B.T. and I am just wondering how is everyone doing on this fine Mech Madness Monday? Now today I want to talk about one of the greatest mecha related games of all time, while that may be a largely opinionated statement it is true that as a whole the Front Mission series is highly regarded for it’s tactical RPG elements and story among other things.

Sadly the west has only seen three official releases from this series and one spinoff release of which isn’t very good. One of the main timeline games we will address today is Front Mission 3 and we will do so with a bit more detail, the other two not being talked about much is that of Front Mission 4 and Front Mission First. But interestingly enough the game series as a whole in timeline sense is all over the place. 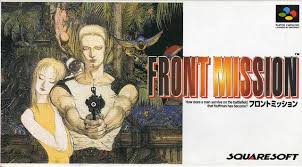 As far as I know Front Mission 2, and 5 have fan made translations available online to make the games understandable to westerners. But all that being said where does that leave the poor spinoff game that did see a western release? Front Mission Evolved which was released 2010 for the PS3 is as stated a spinoff of the main series both in timeline/storyline sense and in a gameplay case. Where as the main series of Front Mission is a Tactical based RPG, the Spin off game Evolved is a Third Person action shooter.

Evolved is more similar to the older spinoff game Front Mission: Gun Hazard which was less tactical and was actual a side scrolling action shooter. Front Mission: Gun Hazard was released originally for the Super Famicom in 1996 and never saw a western release. However the Gun Hazard game despite being 14 years younger and different was a much better game comparatively to Evolved. Again to my knowledge there is a fan made translation online for the SNES Gun Hazard game.

With the time line and side comments dealt with let’s get to the main topic of today: Front Mission 3. As with my statement earlier I must say Front Mission 3 happens to be my favorite mecha related game. It has memorable characters, great story, great music, interesting Mecha that are of course customizable, as well as great tactical gameplay. Another great and sometimes overlooked element of the game is that it has re-playability strictly on the stand point that there are two variant story-lines. Each storyline has some similarities such as locations but they aren’t exactly the same but aside from that there are a few occasions within the game it self where you are given the option on the battlefield. They also have variant allies that you will get depending upon the main story you chose. As you proceed through the game you will be allowed to and indeed need to upgrade your Mecha, which in this series is referred to as Wanzers ( “Wanderpanzer”, or walking armor). 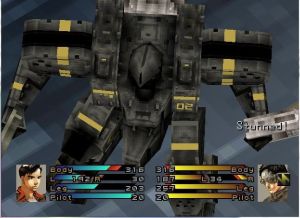 The cool thing about the Wanzers are probably that they are customizable, you can mix and match body parts, equipment and weapon types to make up new Wanzers or make your units standout. You can color them all the same so your unit looks like a cohesive crack military unit or you can color them different to match with the personality of the pilots or maybe color code them to their task within the unit. Pilots all have at the beginning weapons they prefer to sue but you can give them others and they will rank/skill up in those weapons. 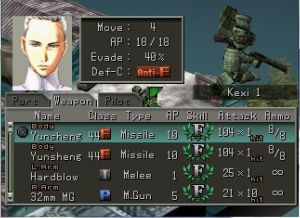 Different weapons and equipment will allow for different skills which are randomly occurring during the battles. Some skills are useful for killing enemy pilots while still inside their Wanzers. Any opposing unit Wanzers that are left unpiloted at the end of battle will be captured (unless it is a special Wanzer) of which you can then sell for extra money, keep/use for building new Wanzers or part out.

By the end of the Game you will have more Wanzers and Pilots regardless of which story than you can field at any one time. That being said you never know when you will need to use a different member than what you consider your main party and so upgrading them is equally a priority as is the main pilots you will use.

Along with basic moving your units as tactical pieces, the various weapons will equally play a tactical role as each weapon is assigned a type, you have P for piercing, F for fire/explosive/high heat, and I for impact based weapons. For P and I there are are both melee weapons as well as long range weapons where as the F type is typically long range such as missiles or mortars. 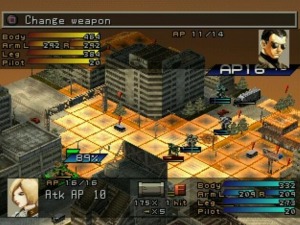 Like most Front Mission games the story involves several countries and war as well as standout individuals fighting for country or whats right and certainly fighting for one another. But as much as I would like to talk about Front Mission 3 even more the best I can do is suggest that if you haven’t played it and love good games or good stories then you must get and play this game! It is available in North America at least through the PSN.

Get a move on…

I’m B.T. and this has been another Mecha Madness post for TheONSGaming.com, thanks for reading!