Hey everyone B.T. here wishing and hoping that you all had a wonderful Thanksgiving meal, that feasts with family we’re endearing to you. But now we are back to playing and talking about video games and in stead of doing a Harvest Moon game this year for the closer I thought about doing another different game. For me and many this was the first farm simulator game and back then I didn’t think it be as fun as it turned out to be. (Of course the title of the post gave this away: SimFarm) 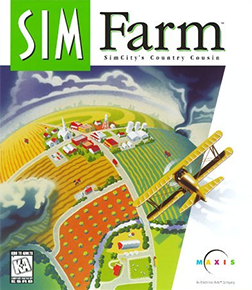 Maxis made SimFarm in 1993 for DOS operating system in CD-Rom format. It was a “construction and management simulation”, but as we know it was a commercial farm simulator. You built your farm, and hoped that it grew until you could afford all manners of crops and animals. Typically you started out with a small area of land where you build your farm. Over time much like SimCity you add to it until it’s rather large.

This game much like several other spinoff Sims titles (titles that would make the Sims series of games all within the 90’s) SimFarm was very similar to SimCity, it used similar graphics and similar coding, so that if you played one when you played another it wasn’t that hard to learn the controls. Also like SimCity were the disasters that could occur. Not only did you have to successfully tend and grow your farm (like any real farming family does) but you also equally have to deal with disasters such as Tornadoes, droughts, pests, and dust storms.

When picking a new game you are given options just like any other sim game. But one of the key factors on what will grow (well) is of course the location (climate) of your area. There are nine preset climate locations based on US climates. However, you can make your own climate by altering average wind, rainfall and temperatures.

While playing I always liked to plan out my farm by drawing it out, where I was going to put what crop or animal pen and which crops or animals I would have on the farm. I would do this on paper with whatever I could get my hands on; crayons/pens/markers and I would do this for every farm. Of course I’m not the only gamer to do this with this game or any game, numerous players plan out creative things while my farms would just be drawn out simple squares and such others get really in depth. But after you plan your farm out and then create you have to farm and sell your crops and animals. 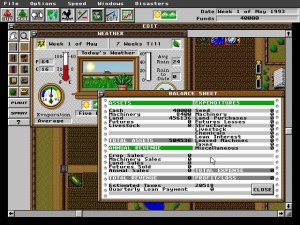 Much like modern day farming in order to harvest your crops however you need to rely on mechanized farming equipment: such as a tractor, planter, harvester, trailer etc. Fortunately like most if not all farming simulator games the crops show maturity, that is to say you can tell when you plant them, the time in between, and when it’s time to harvest. As a simulation this game does a great job showcasing what a farming life might entail in the modern age. The only thing it can’t fully depict is of course the back breaking work one must do to turn a living.

Regardless SimFarm was a fun game when it came out that saw a lot of game playing from me as well as my brother Tirc. It is as I know it the first farm simulator game on the market three years prior to the first Harvest Moon game.