This is the story about why after playing Ocarina of Time almost to the completion of the Water Temple, I was unable to/refused to complete the game. In order to round out the story we first need to start back in approx. 1989…

I don’t remember exactly when this took place but I think I was 6 at the time. My cousin was spending the night and we decided to play The Legend of Zelda on the NES. My save file was at the point leading up to the final dungeon and the final battle with Ganon. So we played through the final dungeon and defeated Ganon.

We were ecstatic; it was the first video game that I had ever played through. After watching the end credits we were brought back to the title screen. I noticed that the save file that my father had been playing on was about at the same place that mine was before, just before the final dungeon. My cousin and I figured “that was really fun, let’s do it again!!”(Paraphrasing of course). We booted up my dad’s save file and “beat the game for him” having just as much fun the second time. Needless to say, when he came home he was not happy. This marked the last time that my dad played any video game other than a sports game. Looking back on it I’m extremely appreciated that he did not get outwardly angry about the situation because I would’ve been livid. Fast forward to sometime in 1999… I was in my room playing my PlayStation I believe I was playing Front Mission 3. My brother, B.T., walks into my room and says “You’re going to kill me.” and I asked why, “because I deleted your Ocarina of Time save.”. At that moment I certainly considered killing him. We ran downstairs so that I could just take a look and I was hoping that he was just looking at it wrong. He was not wrong, he deleted my save file. I was incredibly angry at the time and despite our track record to that point in terms of sibling physical beatings I did not physically harm him. I just walked away because I knew I might be driven to punch him in the arm if I stuck around. A few days later after my anger on the subject had begun to subside; I thought about what I had done to my dad and that was my first lesson in “karma”. To this day I have not had the desire to re-start the game… 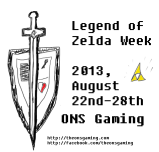