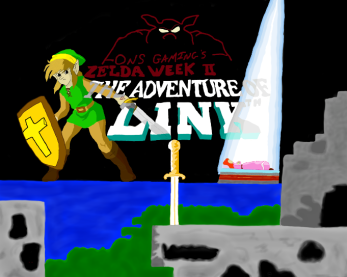 Welcome back to one of our events that I and in fact all of us here at ONS Gaming look forward to since it’s inception. Now this is the second year that this event has been official. How can you not love the Zelda series, specially these days when there is a wide variety of games, from the early 8 and 16 bit to the 3d more modern style games to even cell shaded ones, to a game more similar to Dungeons and Dragons games of old. Unlike many series that don’t change as much, the Zelda series as a whole has always tried to switch up or stay fresh while being similar enough that there isn’t major out cry from fans.

These games in general often symbolize one thing: adventure. And we mean adventure, not the action adventure that is more platform and guns-a-blazing through things at least of the current gaming age… More so due to the fact Zelda games have almost always promoted exploration which to have an adventure you need to go and do things that you normal don’t and haven’t done!

Last year I talked about the Legend of Zelda, the first game that launched the series, and while that first game was the general theme (or Zelda games in general) we as a site really talked about either our favorite games, or other games. And so each years event will have art typically based on the game in question and at least one major post or video based on the theme game but will also include other content that may or may not have a direct correlation.

Again I want to welcome you to this years Zelda Week and I hope you enjoy the content that comes out from us for this event. With this welcoming I want to leave you with this: Zelda is a game series that seems that it will always be with us even as we age and every year the games become even more meaningful as we travel down the life’s path, into adventures we must take, and adversities that we must overcome.