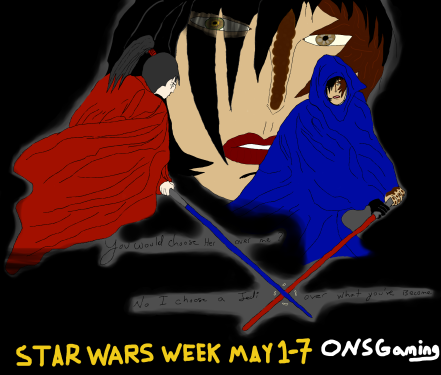 Happy Revenge of the Fifth/Sith Day, recently I talked about what Star Wars means to me on the Star Wars Week Opener, as well as I talked about the N64 game Rogue Squadron. In addition to those I also read Jon’s Knights of the Old Republic post which was a good read, and highly recommended. Ultimately I decided I would write at least one more post for this event; one that fitting for today so I hope you enjoy it.

Star Wars Episode III Revenge of the Sith, the 2005 video game taking its name after the movie of which it was based. The game follows a lot of the movie as one would expect but expands a lot of the scenes for the purpose of the game. Events such as looking for Chancellor Palpatine on the battleship, or the destruction of the Jedi temple by Darth Vader and about six other extended portions. Episode III RotS is at the simplest way to explain is the predecessor of games such as The Force Unleashed and the descendant of older platforming games from the SNES era. The game is a third person action adventure that like stated follows the general story of the movie. 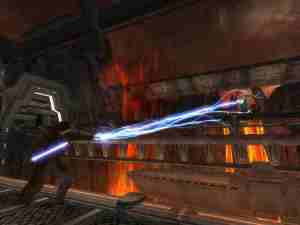 This game got mixed reviews from critics and fans, and in fact the main game is almost forgettable; I just barely remember the few challenging parts but aside from that it’s just not a hit and not memorable. I’m not the only gamer that felt like this; a lot of conversation over this game starts up like this. As for critics the issues were more with camera issues; the older art and graphics style, the AI and how it’s more combat based with simplistic combos which lends it to be a button masher. 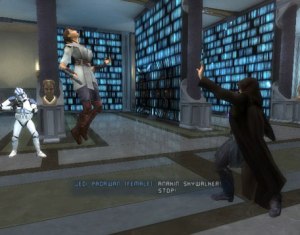 Well then B.T why did it get some positive reviews? Why haven’t you called it bad?
To be perfectly honest the main game is just okay, It’s not ground breaking, it didn’t add anything new to the tale it just expanded something we already knew to add some more fun for us. Graphically sure it was an older art style; it wasn’t as pretty as Halo which came out 4 years prior, but it didn’t look like garbage it was just over all average. Even still it’s an average game and there is fun to be had. There are extra missions that are unlockable which allow you to play as other characters, there’s also unlockable concept art. As to be expected the music is good.

However it did or had one thing that was great about it and made up for the issues and its averages. It’s multiplayer versus mode. The versus-fighter that was added with this game would end up being more fun for gamers than the single player main game. I can say this as fact because it’s one of those things that are always stated in conversation when conversations over this game come up. And I agree and I dislike versus (read: fighter) games, I don’t tend to enjoy myself playing them, a few games excluded.
The Versus characters were well balanced, and the combos were simple so it was readily enjoyable by anyone of any skill level of versus games. It meant that even I could beat Jon who plays a lot of versus games. And many gamers were in similar situations among friends. As for characters there were two extended universe characters added; both human Jedi’s and both killed when Anakin and Clone Troopers raided and decimated the Jedi Temple on Coruscant. Jedi Master Cin Drallig, and his best student Jedi Knight Serra Keto. Anakin Skywalker, and Obi Wan are playable characters along with other unlockables of characters: General Grievous, Count Dooku, Mace Windu, Ben Kenobi, Darth Vader and the two Extended Universe Characters. For an after thought it was a decent amount of versus characters with varying styles. 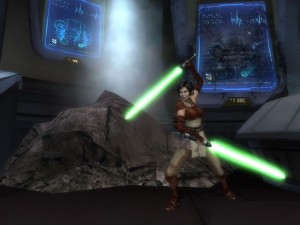