Welcome to ONS’s first Halloween Horror Bash! Let me start by saying I’m not a fan of horror games, movies or anything remotely like that so needless to say I wasn’t too pleased when B.T. told me I had to write something for this event, however luckily I happened to already be playing this game because horror or otherwise I am obsessed with shooter games. Enough about that though let’s move on to actually talking about the game.

One of the first things I realized is that this game has an fixation with killing children. Now I know some of you are probably thinking to yourself “That’s terrible”, however I find it to be a nice twist cause in a lot of video games they tend to spare the children [Except the Ultima RPG Games (John…)] but one of the first “flashbacks” shows one of the monsters bent over a cradle eating a baby. and not long after that there is another flashback showing a teacher telling all her students to get under their desk because the “singularity explosion” is coming but as soon as you snap back into reality all you see is the bodies of the children under their desks.

The game mechanics do a very good job at making you feel cornered by monsters, making them walk creepily slowly towards you but also making it so they can take lots of damage and even allowing them to lose limbs and still come after you. Even continuing on after losing their legs at which point they craw towards you and leave a blood trail on the ground much like George Romero’s Undead. A lot of times the monsters will also play dead in order to trick you into thinking you killed them or even make you think that they were dead when you walked in the room but the moment you let your guard down they will spring back up and come after you. you also need to be semi conservative with ammo especially near the beginning of the game when all you have is the hand gun that does little damage and only has limited ammo which adds to the “alone in the dark” feeling. 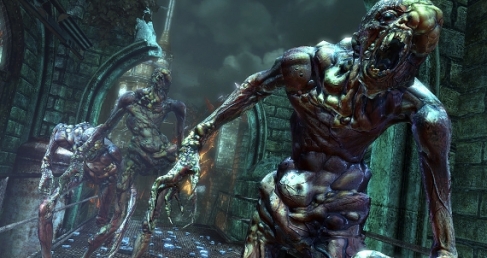 The game developers do an amazing job at setting the scenery whether it be a decrepit abandoned school building or outside with menacing black clouds over head and the beam of power shooting into the air from the “singularity” no matter what level you’re in the scenery always adds to the experience. Throughout the game there are also hidden tape recorders that you can find a play that show what people where going through in there last moments of life, they are always pretty creepy and in some cases even shed some light on hidden parts of the games back story.

One thing I loved about this game was the addition of futuristic weapons that is one thing that always adds to a shooter game; plus it’s something that separates a lot of games because each game has different idea of what weapons will be capable of in the future. The boss fights are top notch and very well planned out with very intense mechanics and insane looking bosses but I’m not going into too much detail because I don’t want to ruin this game. Seriously.

But with that being said I would highly recommend this game to any horror or shooter fan just don’t play alone unless you’re awesome like me. Have a happy Halloween from everyone here at ONS!