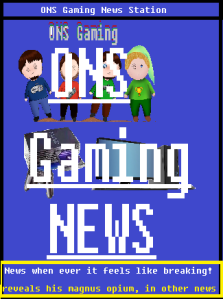 Here at (DPG) ONS Gaming we strive ever more to bring forth posts that have an overall original thought or feel and that are honestly entertaining or informing. So with that I would like to take this time to talk about up coming content and two specific rumors I have been hearing

First and for most there are several posts that are upcoming; a New segment titled: Indie Corner & Review. A new Nostalgia Glasses: Gaming post, another Hindsight, as well as another Game Perceptions and possibly one or two One off Posts.

On top of the posts we may be getting a few contributing authors outside of Me, John, and my Brother (whom due to circumstances can’t yet post anything). On top of that there maybe a partnership in the works yet that’s not completely talked out. We will keep you all in the loops.

John is away on Vacation this week and will be returning by Monday and will roll out more posts upon his return.

I recently had some talks about this rumor among a few different people. Now I must state that Level-5 makes a lot of good games such as the first two Dark Clouds, Dragon Quest VIII: Journey of the Cursed King, both of the, The White Knight Chronicles games and Ni no Kuni: Wrath of the White Witch. They did announce working on PS4 games, of which as far as can be confirmed is a new Ni no Kuni game.

However in the past, Akihiro Hino, CEO of Level-5 has stated that if people/fans want a Dark Cloud 3 than it would be made. Hino designs and picks most if not all of the games to be made by Level-5 though he never gave a timeline for when a Dark Cloud 3 would ever be unveiled.

The only issue I have with this rumor is that Dark Cloud 1 and 2 (Dark Chronicles/Dark Cloud 2) were both outstanding games and Level-5 would be hard pressed to meet expectations and as we all know, expectations in this industry can be killers. Don’t believe me? Look at what happen with Duke Nukem: Forever.

This is another rumor that I have heard about prior but then simply dismissed it. More recently I heard it again. Now while I cant validate this much like the rest us cant. I can however put in my two cents.

First, one of the staunchest members of the Sega corp workforce against making consoles: Simon Jeffery, CEO of Sega in America had left the company in 2009. Back in 2008 in an interview for E3 he made mention that “We an not say it any louder or clearer: we are not in the console business.” A very valid point and yet right after that he stated that ‘even internally there are rumors or [questions about making a console]’. Coincidence… maybe or maybe not. After all you should never burn bridges completely unless they cant ever be used.

Secondly and Prior to Jeffery leaving in 2009, in 2007 Sega put in patents for a Sega Dreamcast system. And yet the patents were unlike the Dreamcast we know of. They may have thought of  putting out a new one  or just putting out a smaller one for Japan only, but we may never know.

Following that for the past few years Sega has been able post profit despite stock being down. And Sega has formed friendly bonds with Nintendo, making several games for them exclusively/initially.

In Late 2010, Yuji Naka called out Sega stating: ” Let me Make Dreamcast 2″ Naka, has been an aid in making former Sega Consoles and is the creator of Sonic, one of Sega’s most prolific game series. Though while Sega remained mute on the point, Naka remained hopeful.

Finally, my take on this matter, while in the past few years they have bonded with Nintendo, held a positive profit and has seen substantial changes I still have to point out the times. Sega is doing well even with a drop in stock, they are in an area where they can remain in the industry without much worry. If they made a new console they wouldn’t know if they will exist in the morrow.

Is it feasible? Well honestly ye it is for Sega but they may not want to risk it. But what… what if they had help? In more recent times they had put in extra patents on jointly made arcade hardware. They claim to be a Third Party Software maker and yet the gears for hardware still turn. Their partnership with Arcade hardware could aid  in making a console. Id not they could turn to Nintendo.

Nintendo and Sega are both down in the stock market and profits albeit are coming in but not in every sector of these two companies. So it makes me worry on the future for them. However in the past game companies have joined together to survive. Sony is what it is today due tot he fact that they originally designed a joint system with Nintendo, but then Nintendo broke that off, and Sony as we all know released their sole vision: The Playstation.

Nintendo had a great console in the Gamecube and yet it wasn’t always well received by all gamers though me personally, enjoyed it and the games on it. When Nintendo Wii came out I was less than
optimistic about it. Sure enough the Wii is either Love or Hate more so than the Gamecube ever saw. To hardcore gamers the Wii is an eyesore and the WiiU is not much of an improvement they were and are steps in the wrong direction away from the Gamecube, the Xbox and the PS.

While other game companies improved Nintendo didn’t but what does that have to do with Sega? In my opinion the problem with the WiiU is it’s game library, the problem with the Wii? Nintendo’s stubbornness with using motion control for every game. What if Nintendo learned on its past mistakes (one which created Sony as a console competition) and made a Nintendo-Sega console that would hold exclusives from both companies?

Rumors of that Joint Co-operation Console have also been spoken of. While hard to tell if they did they could make a system with some games that could be serious competition for Xbox1 and PS4.

Rumor Strength: Cloudy with a Chance of Never going to happen…