Come one, come all. Welcome to Nostalgic Glasses: Gaming. I’ve never done one of these solo before, but B.T. has never actually played Final Fantasy IX, yet he did do an excellent job on the image above (Thanks, by the way), so you get just good ol’ John. Yes, I know you must be very disappointed, but this is one of my favorite games and I plan to do it some justice. So, as Mega Man Volnutt would say, HERE WE GO!

I’m not going to give an elaborate back story on IX. It’s one of the things I hate when a video review takes three minutes to tell me stuff I already know. But here’s the quick version: It’s the ninth game in the immediate Final Fantasy series, it’s a throwback to a more medieval era as opposed to the more modern/futuristic stylings of VII and VIII and on top of it all, the characters were actually different in ways other than appearance and “limit breaks”. Yet it’s one of the more love it or hate it games in the series.

**Please note, the following paragraphs include moderate to heavy spoilers, and unlike TV Tropes, we do not have an option to black them out. If you have not played Final Fantasy IX and do not wish to spoil the story, please click the back button on your browser. You have been warned.**

So any who, Final Fantasy IX was a great game. It’s also my favorite Final Fantasy game. It’s aged rather gracefully apart from the graphics/art style (more on that later), but to me, it was the first “old school” style RPG I had played. I grew up on a Genesis, which had only a few RPGs (and none of which I owned), and then I immediately got a Playstation. To be honest, I thought all RPGs were like FF7 and FF8, I got to customize my characters any way I want, so I just picked the most “cool” characters and had them beat up on monsters. It was fun. Evidently that was more of a recent idea, as it’s not the case when I went back and played older RPGs.

The game was a complete eye-opening experience for me. The opening FMV captivated me in no way that the previous two titles did. No more giant pizza shaped metropolises or stupid angst ridden play fights, it showed a kingdom, a princess and small black mage. The game was so lighthearted, but it knew when to be serious. It didn’t have a sense of impending doom like FF7 all the time, or the ridiculousness of being a teenaged soldier with an implausible weapon. You were Zidane Tribal, a  thief with a tail whose job it was to capture a very gorgeous Princess and return her to her Uncle Cid in the neighboring kingdom of Lindblum. Along the way you met tons of funny and charming characters like your “brothers” in your thieves guild, the blabbering knight who serves as the primary source of comic relief in the game, an old love interest, a bratty girl, the list goes on and on. Even the NPCs were fleshed out well, like the Pickle Seller in the Business District who keeps tricking Steiner into buying more pickles with more and more outrageous claims.

As a main character Zidane has to be the top Final Fantasy protagonist, in my humble opinion. Cloud was a pretty static character with little development, and Squall went from a guy you could sympathize with, albeit a bit “emo”, to a guy who “just couldn’t stand to be away from” the worst love interest in RPG history. Zidane changed all that. No more crying.  No more “I don’t care about anything but the money”. The guy did what he had to do, and was pretty helpful about it. He even helped Steiner, who wanted him locked up in a cell for a good 2/3 of the game. Was he a bit boastful at times? Sure. Did he have his emo moment? Just one (It was justified). There wasn’t really anything to hate about him. To summarize, he was a breath of fresh air. Somehow Square decided it was too good to give us another protagonist like him, so instead we got Fuckface AH-HA-HA-HA-HA-HA in the next game. And finally, Zidane gave us this scene. He wins, hands down.

As I noted in the opening paragraph, this was a very traditional RPG. Each character had a role, Zidane was a thief, Steiner was your knight, Vivi your black mage, Freya the dragoon, Eiko and Garnet were priests/summoner hybrids, and Amarant was a monk. No more materia, no more annoying magic draw system. You had your weapon/armor/accessories and AP, and after you gained enough AP you permanently learned the skill. At first I didn’t like it, but I grew to adapt to it later on, and even come to enjoy it.

The story had it’s flaws (it is a JRPG story, after all), but for the most part it was pretty solid with all sorts of different types of villains. It wasn’t purely a “X did Y, and we hate him because Z”. A lot of the villains were sympathetic, misguided by their loyalty to their kingdom, or their ever shortening life span, or even the fact that in order to save your own planet, it became a necessary evil to harvest a neighboring one. It kept me on the edge of my seat the entire 40+ hours, with surprises gently weaved through the story. I didn’t feel like I had to look at the story in black and white, but rather shades of grey. Not fifty shades mind you, maybe three or four. It also knew how to balance a super serious plot point with a perfect light hearted story device. Almost like a well timed skit on a good rap album. The ending was one of the most heartfelt things I have ever seen and truly cemented Zidane’s status as a likeable dude.

The music is standard Final Fantasy. At worst the soundtrack is very good. At best it’s the best soundtrack of the Playstation era FFs. You need the perfect solemn tune for the death of the Queen? It has it. How about the lighthearted chase scene at the very beginning of the game? Well, they throw an easter egg at you with Rufus’ Welcome March before getting to it, but it’s there. It’s the nice little touches like that the game gives to really complete it’s charm.

I only have two complaints for the game. One, the art style. It never bothered me, but when I ask people if they have played this game, this is usually the number one complaint. Everything was kind of chibi-ized, and the characters were made a little too young in my opinion. Zidane is stated to be 16, and while he looks it, he acts more like he is 19 or 20. I don’t blame people for not liking it, but the game has such a great story and atmosphere that it’s a little silly to hold it against it. The graphics are also rather “blurry”, and while I have to chalk it up to the hardware limitations at the time, FF7, while somewhat super deformed outside of battle, didn’t have that kind of ‘blurred’ effect. I believe playing the game on a PS3 or an emulator (if you own the game, of course) can remedy this issue.

And two, the Trance system. It’s basically the game’s limit break system, but you couldn’t save it for a boss battle like you would in any previous FF game. And it always happened during the worst possible time. Like, when you’re fighting the joke enemy and you accidentally attacked it and you’re two steps away from the dungeon boss. It wasn’t a game breaker, but it happened occasionally. It’s not like I cried or anything when it happened (Okay, I cried a lot). But once it was activated the enemy was pretty much screwed. Later on the Dyne skills or Steiner’s regular attack in Trance mode is almost guaranteed 9999.

In short, I suppose my love affair with this game is one that made me want to play older RPGs that weren’t Final Fantasy. The Lufia games, Earthbound, Dragon Warrior, Phantasy Star, Breath of Fire. I might not have given them a chance if it wasn’t for Final Fantasy IX. In a way, when I hear people say “Man, I wish we had another Final Fantasy VII”, I sympathize a bit. But in my heart of hearts, I truly believe we need another Final Fantasy IX. Oh, and last but not least, Mom, thanks for the game thirteen Christmas’ ago. You were amazing that year.

Reader No Cloud, nor Squall, shall hinder us. We love you forever if you remain our fan, truly will always be our hero… 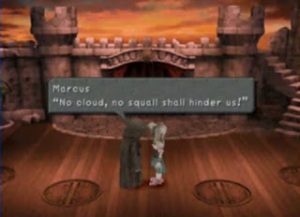 ———————————————————————————————-
We all here at ONS Gaming want to thank you for visiting our site we hope you will return often!
Don’t hesitate to leave comments, suggestions or requests or even questions … down below or at our social medias!
Also don’t forget to follow us and help us via likes and shares on any of our mediums to show support you all make it possible!ONS Gaming Youtube Channel
Twitter: @TheONSGaming
Facebook: Facebook.com/theonsgaming
ONSGaming.Tumblr.comDon’t forget you can always message us here anonymously or email us @ TheONSGaming@Gmail.com or at our individual ONSGaming emails!